An interpretive natural trail is located on the roads that are along the stream. The trail is mostly unpaved and the gradient is very gentle so it can be used by those with physical disabilities. The entire trail when completed will have 14 pedestal mounted signs and is about 3/4 mile in length.

What is a Watershed? All of the runoff from rain that falls on this side of the surrounding ridges flows downhill into this watercourse or stream.

What is Stream Capture? The storm drain inlet (structure with concrete walls and steel grate) is capturing all the surface flow from the stream and directing it into a storm drain pipe. When storm drain pipes and concrete lined flood channels capture and replace natural streams, trees and shrubs that support a diverse riparian ecosystem are lost. In Southern California, nearly 97% of natural streams and riparian habitat have been lost to stream capture.

What is a riparian habitat? Riparian habitat is the area alongside a river or stream, home to plants and animals adapted to living in saturated, sometimes flooded, soil. The plants in the riparian habitat can filter out excess nutrients and pollution in runoff flowing into the stream.

As you walk this Riparian Nature Trail along the stream, you will find additional interpretive signs that describe the plants and wildlife supported by this stream.

California Rose (Rosa californica) is often found in sunny locations where there is ample soil moisture, such as along stream banks. The roses pink-red flowers in the summer provide nectar to pollinating insects. After the flowers mature and petals fall, the rose hips (seed pods) ripen and are exposed. The rose hips are edible and a good source of vitamin C.

The first Spanish explorers observed wild roses growing along the stream that flows by CSULA and noted in their journals that the roses reminded them of the Rosa de Castilla. In the Rancho period, the park site was a part of the Rancho Rosa de Castilla. A community north of the park was named Rose Hills, due to the presence of California wild roses.

The multi-branched trees growing here in the stream are Arroyo Willows (Salix lasiolepis). Willows grow where they can get their roots into saturated soil. Thus, they are found at springs, seeps, and in and along streams. The trees grow from seeds that disperse in the wind, or from stem propagules that may be broken off in storm flows.

The catkins, often called Pussy Willows, (Salix scouleriana) attract many insects, caterpillars feed on the leaves, and small birds find shelter in the dense foliage. Native Americans used the flexible young branches to form the supporting members for their huts. 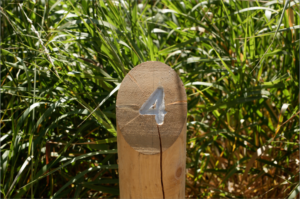 Related to the grass that is grown in lawns, the Giant Wild Rye (Leymus condensatus) is a native bunch grass that grows 3 – 4 feet tall and it seed stalks reach 5 – 6 feet. It grows along stream banks and in draws on hillsides. The seeds provide food for birds and rodents. 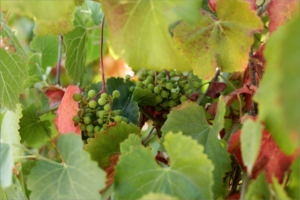 California Grape (Vitus californica) is a native grape. Its vines are often found along streams and at springs and seeps or other moist places. The plants are deciduous so its leaves take on many colors – pink as young sprouts in the spring, green for most of the summer, turning yellow and orange in the fall – and are shed annually The vines produce edible fruits that ripen in the summer. The fruit is prized by many birds and was gathered by the Native Americans who lived along the banks of year-around streams and rivers such as the Los Angeles River.

Note – You should NEVER eat wild-growing plants or fruits unless the plant’s identity can be con-firmed by an expert first. Some plants and fruits in Ascot Hills Park are toxic or poisonous to humans. 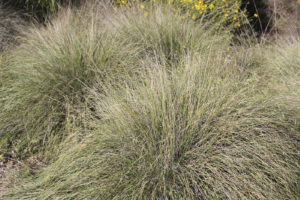 Deer Grass (Muhlenbergia rigins) is a perennial native grass that grows in sunny locations such as in meadows and at edges of woodlands and forests. The grass grows into mounding bunches or clumps. Young deer (fauns) often take shelter by lying among the clumps of grass, thus its common name. The grass produces seeds on spikes that rise above the clumps. These seeds are food for many seed-eating birds and rodents, and the leaves and stalks are used for nest building.

This diagram shows where Riparian and Upland species are found relative to streams and upland hills. Riparian trees need their roots to tap into saturated or moist soils, while Upland trees can grow where there is much less soil moisture.

Upland trees grow in the valleys and hills further from the streams. They can survive with much less water. Up-land trees including Southern California Black Walnut and Mexican Elderberry were here historically, Other up-land tree species that have been planted to provide greater diversity include: Coast Live, Valley and Engleman Oaks.

A pond was created as part of the Park development in 2010 (see photo.) in May 2011 a pair of Mallard Ducks came to the pond and tried to raise a brood of 4 ducklings (see photo.) The pond has since filled in with Cattails and sediments from erosion of the upland hills and roads. Sedimentation is a natural process, and many ponds become marshes or meadows. Many animals still depend on the water that is available for them in the pond, which is now a wetland marsh.

Southern California Black Walnut (Juglans californica californica) is the dominant tree in our woodlands. It is a winter dormant tree that produces an edible nut. The nut meats are inside a hard shell that only birds with strong beaks, such as Scrub Jays, and squirrels with their sharp teeth can break open.

If you look closely at the tree in the spring you may see the young fruits developing at the base of small female flowers on the growing terminals. The male flowers are catkins further in the branches and provide pollen that is disbursed in the wind. In late summer through winter, the ripe fruits turn deep brown and may stay on the tree until an animal or the wind dislodges them. 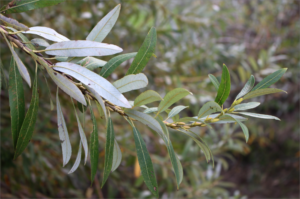 Eucalyptus, Palms and other non-native trees were planted along the stream by early land owners prior to the park development. They have grown tall and mature in the moist soils near the stream. Although Ascot Hills Park is a nature park and the landscaping plan is to plant only California native species, these tall trees provide much needed shade and perching and nesting sites for raptor species such as owls and hawks. The non-native trees are considered a problem since they do not provide as much value to wildlife as native trees and most produce numerous seedlings that displace natives that are coming back on their own or being planted for wild-life habitat. However, mature, non-native trees may remain until replacement native trees grow to provide equivalent shade and roosting/nesting sites. 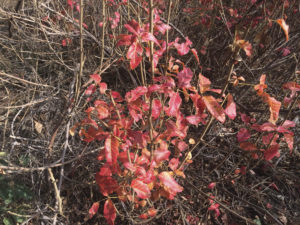 There are many plants in the park that are toxic when eaten. Please do not eat any berries or other plant mate-rials. They may make you sick or seriously ill, requiring medical treatment.

Poison Oak (Toxicodendron divesilobum) is toxic to humans. Both leaves and stems of Poison Oak contain oils that may produces a painful skin rash. The photos shown here will help you identify and stay clear of this plant. Poison Oak is winter deciduous, leaves turn red and orange in the fall, and in the winter the plants are leafless. It is best to stay on approved trails which are well clear of these plants.

Be aware of this plant and avoid it. Remember, Leaves of three, let it be.

At this upstream location the stream flows all year around. This diagram illustrates how water is consumed or lost as it flows downstream. Water is taken up by plants, lost to evaporation, and infiltrates into sandy soils.

Most of the year very little, it any water is left to flow above the surface. However, substantial amount of water flows below the surface as groundwater. This groundwater flow provides moisture for riparian vegetation even when there is no surface flow. There is evidence that groundwater flows beyond the southern park boundary. Many of the homes in the adjacent Hillside Village that were built over the filled in stream course have sump pumps to keep the groundwater level below the foundations and slab floors of their homes and garages.

The tall reed-like plants are Cattails (Typha domingensis). These plants are one of the riparian species that like to grow with their roots in fully saturated soils. Thus, they are found in the stream and in fully saturated soils along the banks. These plants also grow in the shallow pond. As with most riparian plants, they reproduce from wind-blown seeds and from root tubers that may get washed down stream by flood flows.

Cattails and other tule plant leaves were used by indigenous peoples for thatch roofs and for basketry. Seed eating birds dine on the seeds in the mature cattail stalks before they are dispersed in the wind.

The pond that was created as part of the Park development in 2010 has since filled in with Cattails and sediments from erosion of upland hills and roads. Many animals still depend on the water that is available for them in the pond. These photos show some of the animals and insects that still come here for water to drink or in which they lay eggs to reproduce.